Hello all those out there!
Yes the summer continues on. Yesterday was my birthday...and I am old. However my family knows me well and nearly half of my gifts were books. There was one particular title that I think deserved special attention. That title is The Librarian's Passionate Knight and here is the cover: 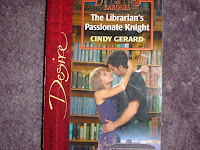 Awesome eh? Oh it gets better. When one opens this classic they will discover that someone has scratched out all the "hells" "Gods" etc. Here's an example: 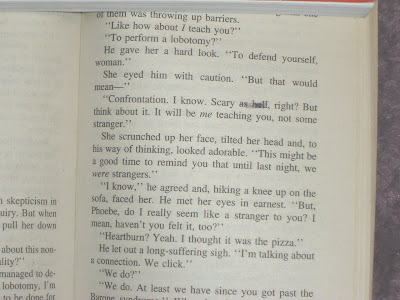 Now mind you all the sex and romance are firmly intact. Thank god someone has saved me from those "bad" words. Somewhere I hope George Carlin is laughing.
Anyway Onward!

Reviews
Wanted
I had heard about this series before but the upcoming movie release moved me to pick it up. This 6 issue miniseries was created by Mark Millar and drawn by JG Jones. The main character is a young man named Wesley Gibson. Gibson is an office drone who finds himself stymied by his mundane life. His mundanity is shattered when he discovers that he is part of a secret world of supervillains who are really running things behind the scenes. He is trained to become an amoral villain known as The Killer by The Fox and The Professor. The undercurrent of social commentary reminded me a lot of Fight Club, however I think that Millar is more intent on spinning around the classic Heroes Journey. In Wanted we are watching the development of a villain and Millar does not hold back. It is difficult to root for a protagonist who revels in murder and extreme violence. Gibson is set up as the lesser of two evils as he goes up against the inhuman Rictor. Although really I found myself questioning whether I cared about Gibson as a character and frankly I didn't. So what's left then? Well I will say that the art is amazing. The cover in which Gibson emerges in his Supervillain costume is just cool as hell. I also enjoyed the clever satire that Millar has thrown, whereas many characters are represent comic icons. I do recommend this to those who are interested in a crazy, dark, messed up comics. Anyone else needs to watch out. This book is not for the weak.

Catwoman: Selina's Big Score
I absolutely adore Darwyn Cooke. As much as I may like realistic, dark, grim comics, a book like this is just a wonderful read. In this story Selina Kyle, also known as the burglar Catwoman, puts together a major heist. In order to pull it off she pulls together a team that includes former lover/mentor Stark whom she has a complicated past. This book is written with a 1950s-60s crime noir. It's funny and cool, reflecting Cooke's sensibilities. Even though the main protagonist is a thief I still found myself rooting for her which is to Cooke's credit. This is a fun read.

Checkout Count: Under Control. I hope.

Hot Time! Summer in the City!

Hello,
Yes I now live in an oven. It's the consequence of being surrounded by concrete I suppose. At least I work in air conditioned buildings. On days like today you couldn't pay me to be a construction worker.
On another front I am currently obsessed with Euro2008. Two international games a day! I'm in Heaven! However this does cut down on my reading time so rather than give you a short entry today I'm gonna combine entries. I've promised you a special focus on the book Quiet Please by Scott Douglas so I'm gonna throw it in here. Don't worry you'll also get a review and current reading list. Just gonna throw in a little extra. So let's get it going already! 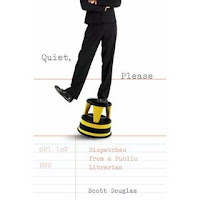 When I heard about this memoir I had to pick it up. Quiet Please: Dispatches from a Public Librarian written by Scott Douglas tells the story of a young man who starts out as a lowly page in the Anaheim Public library system. He decides reluctantly to become a librarian and the book chronicles his journey through 6 years of service. A little autobiography and context to start off. As any constant reader may surmise I spend some of my days as an assistant librarian. I have spent the majority of my life in libraries because my mom has served, and continues to do so, as a librarian for 30 years. Her dedication to public service deserves to be admired, and I am happy to follow her lead.

As I read this book I was struck by the author's raw, sometimes bitter, honesty about everything. This includes his fellow co-workers, patrons, and enemies. Having worked in libraries myself I often laughed and empathized with Douglas. His no hold barred honesty was refreshing and I think eye-opening.

In my opinion every librarian working today should read this memoir. Many co-workers I've had, young and old, have been burned-out by the negative experiences that they've had. Instead of glossing over those experiences Douglas brings them to light. When he states that he often fears that one of his patron will kill him he is half serious. Poignantly he discusses how there are problem patrons that drive him crazy, but he misses them when they disappear. These chapters were enjoyable and eye-opening.

I took Douglas's commentary to heart, especially when a co-worker reminds him "never to put himself above the public." Librarians are "public servants"-a fact that I think is often forgotten. Again I think that all librarians should read this book. I can't recommend it highly enough.

Reviews
DC Comic Guide to Writing Comics
This instructional book by legendary comic writer Dennis O'Neill was very interesting and informative. I recommend this book to any teen/adult who wants to write comics. O'Neill offers technical and story advice in an easy fun format. He also includes great examples from real comics, however I would like to see an updated version that includes 52, a weekly series, or mega-events that are common today.

What's In My Bag
Comic
Rasl #1

Check Out Count: Under Control. I hope.

Alright time to sit in front of the fan and watch nations collide on the soccer field of battle. Enjoy! Book Slave.
Posted by gettsr at 10:04 PM 2 comments:

Hey folks,
How are you? Doing well I hope. Howse your summer going? Good. Excellent. Well for me this week it's all about Soccer and weddings. Yes my life is uber-exciting. At least I have you out there gentle readers. Or at least the delusional hope that you are out there. Are you? *crickets* Well onward!

Reviews
Booster Gold: 52 Pickup
I've been heavily anticipating this trade/spinoff from the comic series 52. Booster Gold is paired with time guardian Rip hunter as someone is trying to off super heroes "terminator" style by offing there ancestors. I love time travel stories so this book scratched that itch. It's a lot of fun making one's way through DC history as Booster tries to maintain continuity. Of course Booster is still the selfish glory hog he's always been, but this series does more than play his character for laughs. His character is given more dimension as he gives up individual JLA glory to save the team. The best issue of the arc involves Booster revisiting The Killing Joke as he tries to save Barbara Gordon. Good new series.

Astonishing X-Men Vol. 1
Fun new re-imagining of the X-Men from Joss Whedon. The "mutant cure" storyline raises a lot of great action and discussion/commentary. (Gay subtext anyone?) However it is the interaction between the characters where Whedon's writing comes through. There is some great dialogue between characters. I particularly loved the scenes between Kitty Pryde and Emma Frost. BTW How awesome is Emma Frost? Now I see why fanboys love her character. She's funny, adult, and edgy. Much like Faith from the Buffy universe. I'll definitely continue with this series.

Quiet Please: Dispatches from a Public Librarian
To sum up quickly: I thought it was awesome. Look for an in-depth blog entry focusing on this title in the next few days.

Check Out Count: Finally getting under control.

I know that we are in the middle of NBA finals, but maybe try some international soccer. There will be a game almost everyday for the rest of the month. Perhaps you might like it. I'm just saying. Anyway have an excellent week! Book Slave.
Posted by gettsr at 11:09 PM No comments:

Time of Decadence, the Famine is Over!

Hello,
The world is bright and I am again financially solvent. Thank you US Treasury (byway of China) for stimulating my bank account. Perhaps now I will be financially responsible and hold off on buying every book I see. Then again maybe not.
Onward to the breach!

Reviews
Essex County 1: Tales from the Farm
This award winning graphic novel flew in way under the radar. This is an original graphic novel about an orphan who comes to live with his uncle on the farm. He likes comic books and befriends a local could've been hockey star. While some scenes were very emotionally affecting I felt a bit let down by the story. Perhaps I was expecting more of a climax, but got something closer to reality. I will say the art in hand drawn black and white was beautiful and full of indelible images.

Green Arrow: Year One
I've been "waiting for the trade" on this mini-series since it ran last year. The "Year One" series has always delivered in bringing insight into the well known origin stories of their main characters. This book is no exception. I enjoyed seeing the evolution of drunken playboy jerk to modern day Robin Hood. The other draw here was the incredible work of British artist Jock whom I had enjoyed in The Losers. His pencils/coloring give us a mix of washed out greens and sharp details. It's hard to describe but it goes beyond the usual art. Also the splash pages are amazing.

Have an excellent week! I will see you in the space between spaces. Book Slave.
Posted by gettsr at 10:23 PM No comments:

gettsr
I'm a girl from Salt Lake who is intent on sharing my bibliomania in the hope that it will expand everyone's world.

"The test of literature is, I suppose, whether we ourselves live more intensely for the reading of it."
-Elizabeth Drew

In my mind I've been to Hampstead Heath

Friends of the Blog

"We must meet reverses boldly, and not suffer them to frighten us, my dear. We must learn to act the play out. We must live misfortune down!"
David Copperfield