Emotional Truth: The Way He Lived & Once Was Lost

Hello,
This is the start of some "review" entries for the next few. Any of you gentle readers who have missed some of my thoughts about fiction, well you're in for a treat.

Emotional Truth: The Way He Lived & Once Was Lost
I've been struggling to write this review for days. It's difficult to revisit the experience of reading Emily Wing Smith's The Way He Lived. There was a moment in the first 25 pages when I realized that I couldn't read this book in public. It was hard enough to keep myself emotionally composed at home-no need for me to break down while riding the bus. The Way He Lived is that kind of book.

Smith's debut novel interweaves six characters who are affected by the death of a young man in their community. Joel Espen died from dehydration while on a cub scout trip to the Grand Canyon. Smith uses multiple character voices to show the terrible void left behind by this loss. I was struck immediately by the emotional rawness of Smith's characters. The author has a real connection with the feelings of these characters. Going beyond the usual 5 stages of grief, Smith is able to find complex emotions in unexpected ways. Miles's anger is linked to Adlen's frustration, even though these characters would never be connected in real life. In turn Claire, Joel's sister, is able to help Norah move on from her secret crush on Joel.

It was not a mistake that at the same time I read The Way He Lived I also read Sara Zarr's Once Was Lost. These two books deal with the existential angst of teenage lives. Lost deals with this dilemma directly as the lead character is already loaded with her own religious baggage. Samara Taylor, nicknamed Sam, is a daughter of a pastor in her community. It is just expected that she should have an unshakable faith. However she has begun to doubt, which mirrors the experience of many teenagers. Both Zarr and Smith are able to capture the doubts and angst of their teenage characters with a heartbreaking acuteness.

The realism of these character's voice reminded me of Laurie Halse Anderson's Speak which I reviewed here. Speak is also written in first person point of view as the main character Melinda tries to sort out her own emotional trauma. This narrative technique allows for a degree of emotional truth that has elevated the genre. These teenage characters deal with tragic events but are able to find an inner strength. My cynical heart shrinks away from the corniness of that description, but the author's ability to make us relate to these characters is important. I desperately wanted Melinda to succeed, to overcome and find her voice. 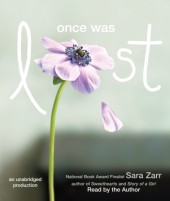 I felt the same way about Sam in Lost. Zarr has a great ability to capture female characters that are conflicted about the superficial lives they see around them. Sam realizes the failure of her parents which is a pretty common revelation for teens. However Zarr is able to parallel this realization with a loss of religious faith. It's not hard to see the narrative construction at work, however the originality lies in the plot. Sam's existential angst is pushed over the edge by the kidnapping of a young girl in their community. Zarr allows for the religious questions that this situation would bring up as seen through the POV of her teenage lead character. Although Sam is not related directly to the missing girl, she realistically is conflicted by the tragedy. Again I feel that this is due to Zarr's ability, like Anderson and Smith, to accurately capture emotional truth.

Like Melinda in Speak, I desperately wanted the characters in The Way He Lived and Once was Lost to overcome their problems. As a reader I need to be emotionally invested in their success. I want to root for them. It's a testimony to Sara Zarr and Emily Wing Smith that I still cannot let go of these characters.
Posted by gettsr at 12:32 AM

gettsr
I'm a girl from Salt Lake who is intent on sharing my bibliomania in the hope that it will expand everyone's world.

"The test of literature is, I suppose, whether we ourselves live more intensely for the reading of it."
-Elizabeth Drew

In my mind I've been to Hampstead Heath

Friends of the Blog

"We must meet reverses boldly, and not suffer them to frighten us, my dear. We must learn to act the play out. We must live misfortune down!"
David Copperfield